In this article I describe Dijkstra’s algorithm for finding the shortest path from one source to all the other vertexes in a graph. Afterwards, I provide the source code in C of a simple implementation.

To understand this you should know what a graph is, and how to store one in memory. If in doubt check this and this.

Another solution for this problem is the Bellman-Ford algorithm.

Given the following graph calculate the length of the shortest path from node 1 to every other node. 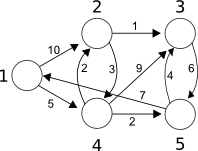 Dijkstra’s algorithm is one of the most common solutions to this problem. Even so, it only works on graphs which have no edges of negative weight, and the actual speed of the algorithm can vary from O(n*lg(lg(n))) to O(n2).

The idea is somewhat simple: 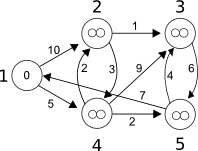 Now, we already know that the graph has no edges of negative weight so the a path of length 0 is the best we can come up with. The path to the source is 0, so it’s optimal.

This algorithm works by making the paths to one more node optimal at each step. So, at the kth step, you know for sure that there are at least k nodes to which you know the shortest path.

At each step, choose the node, which is not yet optimal, but which is closest to the source; i.e. the node to which the current calculated shortest path is smallest. Then, from it, try to optimise the path to every node connected to it. Finally, mark the said node as optimal (visited, if you prefer). In the previous example, the node which is closest to the source and is not yet optimal is the source. From it, you can optimise the path to nodes 2 and 4. 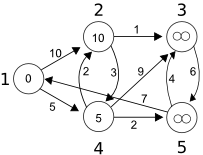 At this point, the only visited/optimal node is 0. Now we have to redo this step 4 more times (to ensure that all nodes are optimal).

The next node to consider is 4: 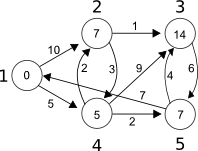 It’s worthwhile to note that at this step, we’ve also found a better path to node 2.
Next is node 2: 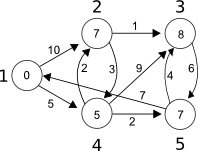 Finally, we look at nodes 5 and 3 (none of which offer any optimisations):

The actual code in C looks something like this:

Putting the above into context, we get the O(n2) implementation. This works well for most graphs (it will not work for graphs with negative weight edges), and it’s quite fast.

And here’s a sample input file(dist.txt):

That’s it. Good luck and have fun. Always open to comments.

Now we know the distance between the source node and any other node (the distance to the ith node is remembered in d[i]). But suppose we also need the path (which nodes make up the path).

Look at the above code. Where is d modified? Where is the recorded distance between the source and a node modified? In two places:

Firstly, d[s] is initialised to be 0.

And then, when a new shortest path is found, d[i] is updated accordingly:

The important thing to notice here is that when you update the shortest distance to node i, you know the previous node in the path to i. This is, of course, mini. This suggests the solution to our problem.

For every node i other than the source, remember not only the distance to it, but also the previous node in the path to it. Thus we have a new array, prev.

Now, we need to make to modifications.
First, we initialise the value of prev[i] to something impossible (say -1) at the start of dijkstra().

Secondly, we update the value of prev[i] every time a new shortest path is found to i.

Here is the updated source: dijkstraWithPath.c.